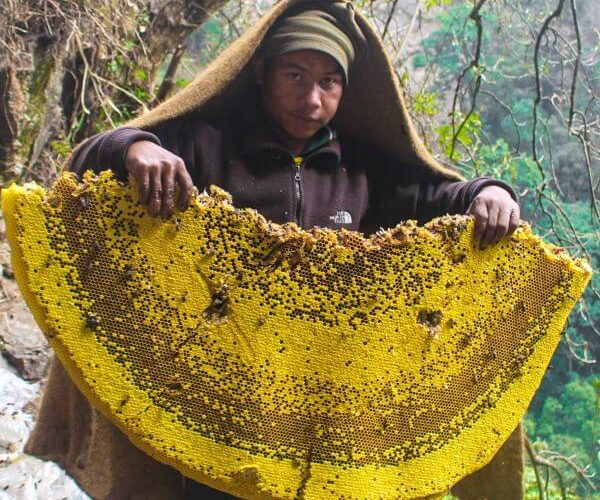 prisingly, there is not a lot of scientific research on this topic. Many people would not believe that there is a type of honey that causes hallucinogenic effects. Across the world, this honey is harvested from bees in a handful of regions ranging from the Pacific Northwest to Nepal. Honey is known for its different color from typical honey and its bitter taste. Due to the scarcity of mad honey, its addiction effects are not something that has been studied extensively. There is still much unknown about this substance.

What is mad honey?

Mad honey is a type of honey that has been infused with the pollen of certain plants. This gives the honey a unique flavor and also makes it more potent than regular honey. The bees that produce mad honey feed on the rhododendron flowers, which are rare to find. These evergreen flowering plants are located in the Himalayan region and have been used for centuries in traditional medicine.

They contain chemicals called grayanotoxins, which can cause dizziness, nausea, and vomiting when consumed in large amounts. These effects make people believe that mad honey could be addictive. The rhododendron flowers contain compounds that are responsible for the psychoactive effects of mad honey. These neurotoxic compounds are cyclic diterpenes that exist in different varieties and concentrations, depending on the time of year and the specific rhododendron species.

Frequent users of mad honey understand the risks and are careful not to overindulge. A small amount is enough mainly because this substance contains toxins in undetermined concentrations. Erowid, a community known for such experiments, strongly discourages the consumption of rhododendron flowers. This is because the plant has grayanotoxins, which can be fatal if consumed in large amounts.

Mad honey may not typically be considered addictive, but some people may develop a tolerance to the effects. This means that they will need to consume more honey to get the same impact. In other cases, there have been reports of people becoming addicted to the honey and experiencing withdrawal symptoms when they stop using it. These symptoms include anxiety, insomnia, tremors, and sweating.

In these few cases, it is not clear if this is because of the honey itself or because of other factors such as health-related conditions. It is possible that other factors, such as underlying mental health conditions, played a role in these cases. However, like any substance, it is possible to develop a psychological dependence on it.

In the case of withdrawal symptoms, there is no evidence that mad honey is a possible cause. However, some people may become psychologically addicted to the unique effects of mad honey. If you are concerned about becoming addicted to mad honey, it is best to speak with a doctor or other medical professional before consuming it.

While there is no proof of the addictive properties of Real Mad Honey, it does contain compounds that can be harmful to your health. Mad honey has a compound called pyrrolizidine alkaloids (PAs) that can cause liver damage. PAs are found in many plants, but they’re mainly concentrated in certain types of honey. Mad honey has been used as a traditional remedy for centuries, but it’s only recently that scientists have begun to study its effects on the human body.

The fact that mad honey is so rare and not well researched makes it hard to say whether or not it is addictive. However, the potential risks associated with mad honey make it clear that it is not something to be taken lightly. If you are thinking about trying mad honey, it is best to speak with a professional beforehand. They can help you understand the risks and make sure that you are taking the necessary precautions.

Also, if you find that you can’t go without mad honey, or if it is causing challenges in your life, it is essential to seek help from a medical or mental health professional. Addiction to any substance can lead to severe problems, and it is crucial to get help if you are struggling with it. There are also many resources available to help you overcome addiction, so don’t hesitate to reach out for help.