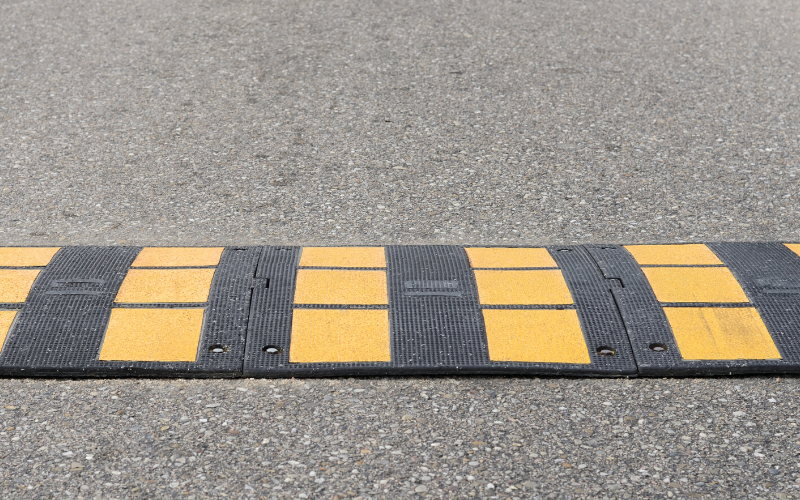 According to the Global Status Report on Safety 2018 published by the World Health Organization, road traffic injuries are now the leading cause of mortality among young people. An estimated 1.35 million traffic deaths are recorded every year.

Speed is considered the topmost cause of road accidents and deaths. As vehicles speed up, motorists are less able to control them in case of road conditions increasing the risk of collisions (often fatal). Authorities employ different traffic calming strategies to address this problem, such as roundabouts, traffic signs, and speed limits. However, speed humps remain the most commonly used devices and an effective speed-limiting device.

What are speed humps?

Speed humps are a variation of speed bumps, which were first introduced in the early 1900s. Although the terms speed humps and speed bumps are used interchangeably, they are actually different. Speed bumps and speed humps both use a 2-4 inch rise. However, speed humps have a longer travel distance resulting in more vigorous jolting for the driver. To reduce the jolting, a driver needs to slow down to 15-20 miles per hour.

Usually, these speed-limiting road devices are installed in local roads and lanes, accident-prone road sections, and areas where low-speed is preferred but full stops are not possible or necessary. They use a variety of materials, such as concrete and asphalt for permanent installations, and plastic and vulcanized rubber for temporary installations.

Judicious planning is necessary for the effective use and positioning of this road safety device. Usually, temporary bolt-down humps are placed for testing prior to implementing a larger project. Speed humps should be installed in a way that it does not disrupt on-street parking and cycling lanes.

When installed properly, speed humps can effectively vehicle speed by up to 10-15 miles per hour. A study conducted by the Iowa State University noted a significant reduction (up to 40 percent) in vehicle speed in areas where they are installed. It is very effective in preventing over-speeding.

Studies noted fewer accidents in road sections where this speed limiting device is installed. In local roads and neighborhoods that have speed humps, children are much less likely to be struck by vehicles.

Compared to other traffic calming devices, the results of speed humps don’t revert over time. Road signage and speed limits are effective initially but would lose efficacy later on. Motorists tend to become accustomed to the presence of speed humps; hence, they slow down upon approach.

Although the efficacy of speed humps in making neighborhoods safer is unquestionable, some critics noted several disadvantages such as damage and wear-and-tear on vehicles over time, delayed emergency response time, and increased traffic noise.

According to a professional paving contractor at pavingandsealcoating.com, the proper planning and use of appropriate material can help mitigate these issues. Speed humps should be placed on level roads, relative to curbs, intersections, streetlights, driveways, and manholes. The use of plastic and rubber materials instead of asphalt and concrete can also reduce damage to vehicles. Speed humps should also be made more visible so drivers can anticipate them. Aside from paint and reflective strips, signage should be installed, especially since speed humps can get covered with snow.

One of the frustrations with speed humps is that they can increase emergency response time. To mitigate this problem, they should be installed in a staggered formation between opposing lanes and speed cushion configuration. This enables emergency vehicles to swerve past them.

Speed humps increase noise levels by causing vehicles to rev up over the humps as well as a constant barrage of scrapping cars. The use of rubberized materials can help minimize noise. As much as possible, these devices should not be situated near residential areas to avoid undue noise.

Lastly, installing and maintaining speed humps can be expensive. A span of speed humps can cost around $7,500. Removal, either due to a court order or under pressure of citizens, also entails a lot of costs.

As with any other road safety measure, speed humps come with shortcomings and frustrations. However, considering its numerous benefits, especially in making our roads safer, having them on our roads is a worthwhile sacrifice.